Remember when a $20 burger or a $100 per person dining experience seemed absurd? While still worthy of an eyebrow-raiser, it’s not overdone or overly exceptional. What if I told you that a meal at $158 for one was a bargain? An omakase seat at Umami in North Cambridge is about as much during the week and slightly more at weekends; it may sting your eyes, but compare it with a similar experience at the famous upscale O Ya sushi bar in Boston’s Leather District and you’ll see what I was getting at. For your hard-earned dollars on a special night (and for me and an omakase friend I go with, it’s like once a year, or both) you get an 18-course meal where every course is cooked in front your eyes with an explanation of each course and where it comes from, from sea to headquarters. It’s a unique, personalized experience in an L-shaped bar with chefs working on sight while engaging with the audience – not quite the interaction of a Bisuteki, but let that make sense to you. .

The seating arrangement is tight, but there’s no nudging — unless, maybe, you’re the Bruins’ next prospect. Before getting into the culinary experience, a little housekeeping:

The name “Umami” is a Japanese term for a savory seasoning or savory taste. It’s a fitting nickname for a chef-owner Gary Lei who opened to rave reviews in 2019 in the space who was the revered Hana Sushi for over 30 years. Then, of course, Covid hit. Lei and his team did takeout, but omakase is an experience that can’t be boxed and delivered; now they’re back with the same dining experience that made them worthy before the pandemic.

“Omakase” is, in Japanese, basically “I’ll leave it to you”, which means the chef prepares a menu and you kinda eat blindly what they prepare. What Lei’s dishes are quite intoxicating, fresh, subtle and sublime. 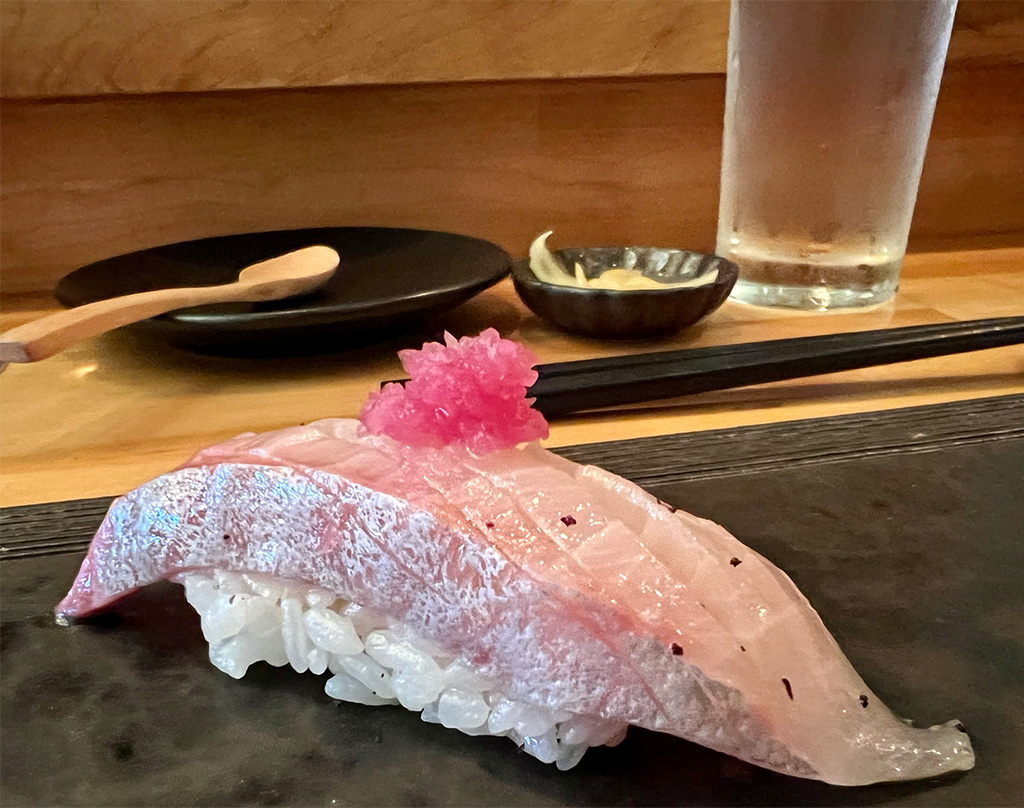 A portion of amberjack, or kanpachi, at Umami. (Photo: Tom Meek)

On my last pilgrimage there, the evening began with a perfectly shucked oyster on a bed of pebbles and roe (quail and roe) and plain (sea urchin) with capers on a sculpturally curved spoon. It was delicious and went down too quickly and easily; I wanted seconds but there were more servings on the way which included preparations of yellowfin tuna (hamachi), fatty bluefin tuna (toro), salmon (sake), red snapper (madai) and amberjack ( kanpachi), each small works of art with accents of eggs, capers, pickled onions and more. It’s cliche to say they “melt in your mouth,” but it’s true, and after putting each one down, my cohort and I looked at each other with wistful smiles of smug elation. It’s a two-hour culinary odyssey that we never wanted to end, but as it did, a desert appeared in a small wooden crate of smoldering dry ice. In the glass was something of a whipped flan – a creamy, light vanilla heaven. Like the previous 17 items, I wanted a duplicate. The flavors, the quality control in the selection and the meticulous preparation (the rice: room temperature, not sticky or heavy, just perfect) are really added values ​​that are worth every penny. Most nights there is a special option (because it goes until the 19th). When we visited, for about 20 dollars, it was a special prep for college. I’m not usually a big fan of sea urchins, but as my friend said, “For a penny, for a pound.” The plump, golden-yellow sea urchin emerging from its seaweed wrapper, cut fresh at near room temperature, will probably go down as the best sea urchin I’ve ever had. I’m glad I did, and that’s one of the great and challenging things about omakase: you try new and different things without thinking too much.

The meal comes with various sake pairings starting in the $20 range and increasing with the number of flights; there are also selected reserve options. Me and my friend, given the heat wave, opted for a bottle of sauvignon blanc, a perfect pairing for a perfect outing.

Cambridge writer Tom Meek’s reviews, essays, short stories and articles have appeared in WBUR’s literary journals The ARTery, The Boston Phoenix, The Boston Globe, The Rumpus, The Charleston City Paper and SLAB. Tom is also a member of the Boston Society of Film Critics and bikes everywhere.